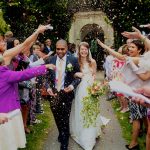 I love taking shots of people chucking stuff at brides and grooms. I know that sounds strange, but then so is the custom of doing just that – the confetti throwing. Apparently it’s something to do with the Italians…

Anyway, my thoughts have turned to confetti today. That’s not to say that I haven’t been thinking straight, more to say that there’s more than one kind of confetti. This year’s weddings seem to have been split between foil, paper and dried rose petals and it’s the latter that’s got me thinking. Foiled plastic may look sparkly but it’s not biodegradable – in other words, someone’s gotta sweep it up which is why it’s not welcome at any church that I’ve come across and equally shunned by hotels and country houses alike. Let’s face it, in this day and age, there is simply NO excuse for using non-biodegradable confetti. If you’re buying confetti as a guest, particularly confetti-poppers, please make sure it’s not foil or plastic. Paper confetti does shrivel away in the rain, but it seems to lack that romantic feel. Which brings us back to flower petals. There are definitely two kinds available to the confetti chucker – the air-dried and the freeze-dried. What’s the difference and what’s it got to do with me, a humble wedding photographer?

If your hand is full of the air-dried variety, it would seem that what you launch at your happy couple is not soft, supple and large like rose petals are meant to be, but hard, crisp and tiny. It’s a bit like having a bowl of pot-pourri tipped over your head. Without the pine cones admittedly. To my thinking, this is unsatisfactory for two reasons. One, the gritty stuff gets everywhere and causes no end of itchy-scratchiness for the couple for the rest of the day. Two, it looks rubbish on the confetti photos, which is my real point of interest. 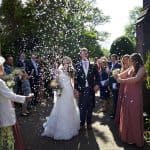 Having used the freeze-dried variety on my own wedding day, I can vouch for its baby-skin-soft loveliness and I can even recommend a supplier for you: Trulymadlydeeply.biz. So go on. Go for it. Check these guys out and get a few pints for your guests to throw at you. You won’t regret it! And I’ll supply you with the photographic evidence!

< Newer Article
Older Article >
All text and images are © Daniel Charles Photography 2021. No reuse is allowed except with permission.